Yes, it’s the next day and after finding out we were “evacuated” due to a bomb threat, we still went back.  We needed to pick up a few frames and some planters for our balcony.  We decided to try eating at Ikea again and hopefully, we won’t get kicked out.  Some of you may wonder why the hell we’d eat at Ikea.  I’m not sure.  The food is super delicious but really, for the price, it’s not so bad.  Plus, I actually really like their swedish meatballs and Chad is a big fan of the smoked salmon salad. 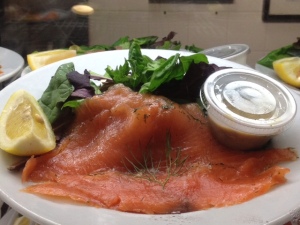 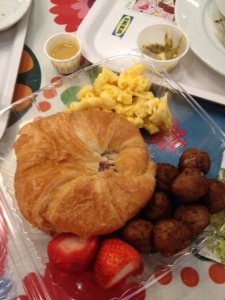 A new sandwich that they have rolled out is their tuna salad on croissant.  I’m not sure why Chad got it because he didn’t even touch it.  He also ordered a side of mac and cheese and barely ate any of it.  So weird!

One thing we did get was the chokladkrokant.  It’s this delectable chocolate cake with toffee pieces on top.  It’s one of the tastiest things I’ve ever had. 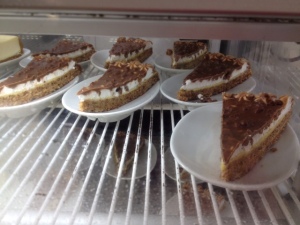 I’m very tempted to buy a few boxes and serve it at my next event.  That stuff is SO addicting.  In fact, I ate the entire slice and only left Chad a few slithers.  I felt awful!  It’s one of the few desserts that he loves as well.  In the end, we did get our frame: 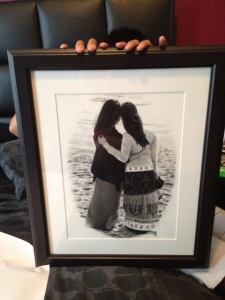 What do you think?  That was hand drawn with a pencil by a friend of my cousin’s.  Beautiful, isn’t it?  He drew it using a photo my sister and I took on the beaches of Santa Monica a few years ago.

Anyway, later on that night, we had dinner with My and Michael at Banana Leaf in Chinatown.  We both really love Banana Leaf.  It’s a Malaysian food restaurant.  Everything there is so full of flavor and the prices are so reasonable.  I was already a big fan beforehand but after eating Malaysian food in Singapore, I became an even bigger fan of the restaurant. 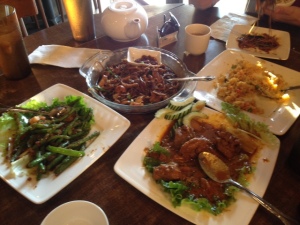 We ordered the Malaysian String Beans with Shrimp, Banana Leaf Curry Chicken, Pineapple Fried Rice and some egg noodle dish that My and Michael ordered.  I only remember it as F3.  Everything was delishious.  I would highly recommend Banana Leaf to everyone.  In fact, I have!  I wish I could take my coworkers there, but it’s so far away.  The food there is so authentic and delicious.  My mouth is salivating just thinking about it now. LOL.